Journey Through the World of Music Video: A multimedia guide for the UNESCO World Heritage Site at the Völklingen Ironworks with automatic triggering and lip-synchronised soundtracks

In 1994, the Völklingen Ironworks in the German state of Saarland became the first industrial monument in the world to be designated as a UNESCO World Heritage Site. Once a driving force behind the Industrial Age, the ironworks later produced the steel for military helmets in World War One and armaments in World War Two. Following its closure in 1986, the site became a unique venue for art, culture and nature. Until October 2022, its fully restored blower hall is presenting a spectacular exhibition entitled ‘The World of Music Video’. supraGuide DIVA multimedia devices from tonwelt play a central role in the event.

The restored blower hall at the UNESCO World Heritage Site of the Völklingen Ironworks is a truly gigantic venue. Yet when visitors first enter this 6,000 square meter hall for ‘The World of Music Video’ exhibition, it feels more like stepping into a Silent Disco. Throughout the hall, the images of famous historical or contemporary music videos can be seen playing on a number of enormous screens. Though strangely, nothing can be heard from them. Not until the visitors put on the headphones of their supraGuide DIVA multimedia devices and approach one of the circular markers on the floor. Because when that happens, the audio track for whichever video they’re watching suddenly starts to play as if by magic – completely automatically and perfectly lip-synched to that particular hanging screen. All around the hall stand metre-high machines and oversized ovens surrounded by pipes, girders, platforms and small common rooms, silently evoking some very different sounds from the industrial past. Old style TVs flicker in the niches between these architectural features, creating intimate contrasts with the large-scale projections floating above them. The TVs stand on pedestals which each contain a small triggerPoint XS. When visitors move their supraGuide DIVA towards these triggerPoints to scan the signal, the sound is once again lip-synched perfectly with the video playing on that TV.

A journey with and through an art form

“Music videos are comprehensive works of art set to a beat, a special creative platform for musicians, film directors, artists, designers and choreographers. Music videos are reflections of our times and an integral aspect of our contemporary culture; accessible everywhere, produced worldwide, they are an essential component of the global entertainment industry. They are also a world of their own in their unique fusion of film, music, art, dance and contemporary issues.” That's how the exhibition describes itself in its introduction. And it’s undoubtedly true. All the topics that surround us in our daily lives become merged together in music videos. Digitalisation, artificial intelligence, political violence, gender and gender equality, environmental destruction, culture, politics ... Everything becomes condensed under the magnifying glass in a highly artistic way.

In no other media is the non-synchronisation of images and sounds so noticeable as in music videos. That’s why achieving the optimal technical performance for this multimedia guide was so important. As the managing director of tonwelt, Gürsan Acar, explains: “Any offset between image and sound is clearly perceptible for a layman at around 60-80 milliseconds. For professionals, the difference can already be noticed at just 20-40 milliseconds.” So in other words, it is only possible to create such an immersive exhibition as ‘The World of Music Video’ by combining specialised, high-performance technologies. Optimal synchronisation requires the multimedia guidance system to be perfectly coordinated with all of the exhibition’s video projectors and monitors. Consumer-based technologies like BYOD, WLAN or Bluetooth beacons simply won’t cut it. Immersive exhibitions like this one need highly reliable technology – and an experienced team – that’s able to optimally coordinate every parameter in the overall system.

Precision triggering: for the first time with tonwelt’s Focus Mode

Perfect video-audio synchronisation was just one of the challenges that tonwelt had to master for ‘The World of Music Video’ exhibition. Another was the extremely focused automatic triggering that was required at various projection stations. According to the exhibition concept, visitors needed to receive a signal automatically whenever they approached a corresponding symbol on the floor. Yet whereas under normal conditions such triggering zones are relatively large, at the Völklingen Ironworks they were much closer together, with different videos often being played simultaneously on both the front and back of each screen. In order to solve this challenge, tonwelt succeeded in further refining its tried-and-tested automatic triggering technology so that it now offers a Focus Mode, which enables extremely precise automatic triggering via tonwelt supraGuides. Ultimately, the technical complexity of this exhibition makes it a must-see event not only for music (video) fans, but also for AV integrators, scenographers and exhibition designers looking to gain new inspiration for their own immersive visitor guidance projects.

Homepage of the exhibition 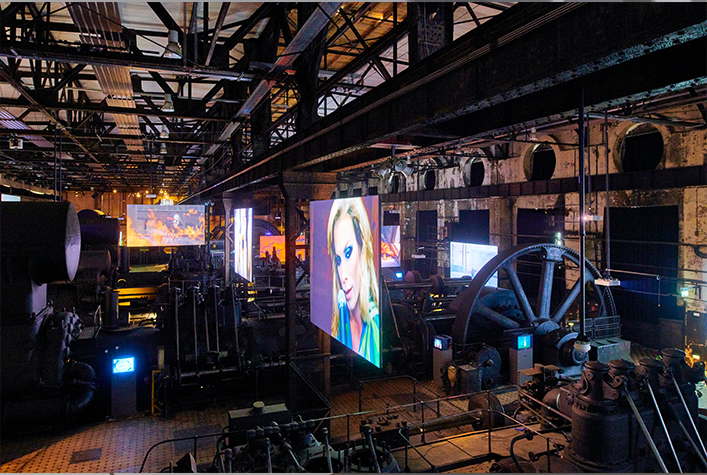 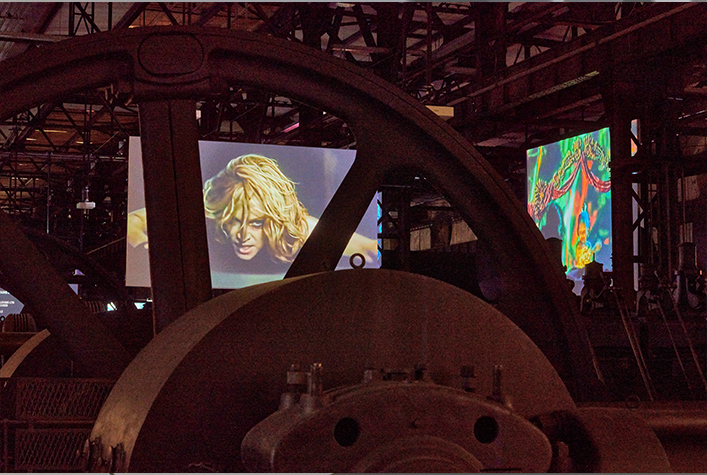