Opposite the Anhalter Bahnhof in the historic centre of Berlin stands an equally important building, known as ‘Deutschlandhaus’. Since the summer of 2021, this building has been the home of the new Documentation Centre for Displacement, Expulsion, Reconciliation. With impressive architecture from Marte.Marte and a insightful scenography by Atelier Brückner, the new Documentation Centre provides visitors with an opportunity to approach its complex subject from both a historical and a contemporary point of view. This multi-perspective approach is made possible through the use of the supraGuide TOUCH4 audio devices from tonwelt.

A wide staircase leads up to the first floor of the Documentation Centre’s newly designed museum building. The atmosphere is open and welcoming. The walls are unplastered: light-grey exposed concrete and reduced colour accents neutralise the manifold impressions of Berlin's inner city. ‘Deutschlandhaus’ stands in the historic heart of Berlin, in an area of cultural significance, around the corner from Potsdamer Platz. The building’s past is directly linked to the themes it represents today: Flight and Explusion. After Second World War, the Deutschlandhaus became the residential base of an organisation for displaced persons. Following the construction of the Wall, the building became the first port of call for GDR refugees. “People mostly flee or become displaced during wars and armed conflicts,” explains the museum. “They then have to build a new life for themselves far away from home, usually under adverse conditions. The Documentation Centre has been created to highlight the causes of flight and expulsion, and to examine what such a fate means for those affected”. The fact that the Documentation Centre looks at this important topic from both a historical and a contemporary viewpoint means that it’s far more than just another history museum. By sharing its story through multiple perspectives, it allows visitors to experience the subject not only through examples from the past, but also through the contemporary relevance to their own daily lives.

The scenography and audio tour are interdependent

To a large extent, the remarkable scenography by Atelier Brückner has been inspired by the Documentation Centre’s multi-perspective approach. For example, many of the museum’s showcases stand at eye level, allowing visitors to view the highly emotional exhibits from all sides. The same approach is echoed in the audio tour, which ultimately becomes the key to understanding the whole exhibition. supraGuide headset devices are handed out to every visitor at the entrance. Without their assistance it is impossible for visitors to fully access the stories of the museum’s exhibits. To ensure the widest possible access, the Documentation Centre’s audio tour has been made available in 6 languages, including easy-to-follow versions and audio-descriptive narrations. Importantly, the audio tour does not merely comment on the exhibits in the usual way, relating their origin, creation and history, but rather enables visitors to experience an exhibit’s relevance from multiple perspectives.

For that reason, there is often not just one commentary or soundtrack for an exhibit, but three. A striking example of this can be found at the exhibit showing Otto Rosenberg’s ID card for victims of fascism. Rosenberg grew up in Berlin. At the age of nine he was taken with hundreds of other Sinti and Roma to the forced labour camp in Berlin-Marzahn. In 1943, shortly before his 16th birthday, he was deported to the Auschwitz concentration camp, and from there to several other camps. In April 1945, Otto Rosenberg was a prisoner at the Bergen-Belsen concentration camp when it was liberated by British troops. The showcase itself contains Rosenberg’s identity card, which recognised him as a victim of fascism in the post-war period. Directly under the case are three tonwelt triggerPoints, each with a small headphone symbol and a short description of what can be heard in the accompanying track. The first contains a statement by Reinhard Alings, one of the curators of the Documentation Centre. The second contains a commentary by the political scientist Peter Widmann, who describes the same exhibit and its meaning from a completely different perspective. The last triggerPoint plays a recording made by Otto Rosenberg’s daughter, Petra Rosenberg. It is through the interplay of these individual commentaries that the visitor gains a more complete, multi-perspective appreciation of the exhibit’s importance.

The supraGuide as an interpretation tool for individual visitor participation

The audio tour at the Documentation Centre has been designed to serve as the central instrument for communicating knowledge to individual visitors. In addition to just triggering the audio tracks, the supraGuide devices also facilitate interaction by enabling visitors to participate in the exhibition at segments like the voting station, where the visitor’s supraGuide becomes a voting tool. In this elaborate installation by Atelier Brückner, small black balls are stacked up inside five transparent Plexiglas tubes, with boards above them indicating the subject that the visitors should vote on. When a visitor approaches one of the corresponding triggerPoints under a voting tube, a mechanism is triggered by the supraGuide and a black ball drops down into that tube to represent the cast vote. The visitor’s supraGuide device also controls the lighting for certain showcases or exhibition areas and is used to automatically synchronise video soundtracks to the pre-selected user language at the museum’s numerous media stations. In other words, the supraGuide devices from tonwelt serve as the central interpretation tool for each individual visit. As well as providing the hardware and software for the audio tour, tonwelt was responsible for the audio tour’s production, which includes original sound recordings, full tours in German and English, and highlight tours in six languages. The audio production was carried out at tonwelt’s own sound studios.

Homepage of the documentation centre 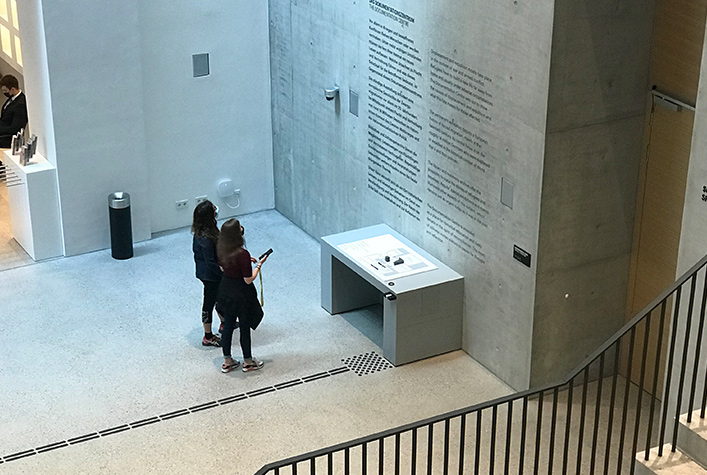 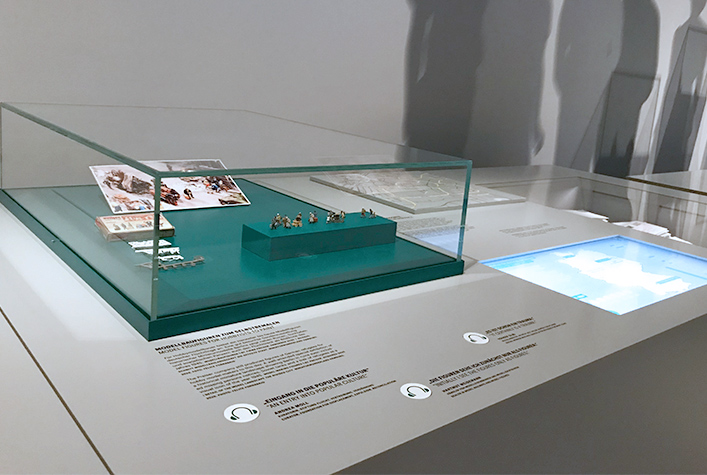 The content of the exhibits can be accessed by simply triggering the audio guide. © tonwelt GmbH Photo: Daniel Franz